And you wouldn’t be wrong. Such a vast amalgamation of Muslim fashion has never existed in the non-digital world.

Until this past Friday, when influencers, designers and even a princess jetted off to San Francisco for the Contemporary Muslim Fashions exhibition. A product of two years’ work, the exhibition opened in the de Young Museum in California to a whole lot of fanfare and a whole lot of press.

“Spotlighting places, garments, and styles from around the world, this exhibition considers how Muslims define themselves—and are defined—by their dress, and how these sartorial choices can reflect the multifaceted nature of their identities… Including social media as primary material, Muslim voices and personal narratives are framed by runway footage, news clips, and documentary and fashion photography.”

Contemporary Muslim Fashions covers a wide breadth, featuring 53 designers from around the world These designers hail from all over the world, Malaysia and Turkey to America and London. There are traditional handwoven songkets from Southeast Asia, designer looks from Oscar de la Renta, Blancheur and Yves Saint Laurent. Modanisa from Turkey has their collection with designer Rasit Bagzibagli on the floor. Dian Pelangi of Indonesia is featured in the gallery. Celine Semaan Vernon is showing her collection of scarves that her brand, Slow Factory, made in response to Trump’s Muslim Ban. 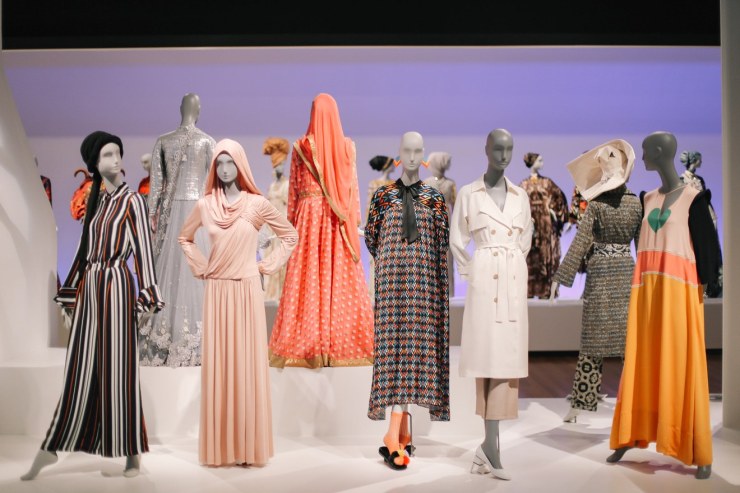 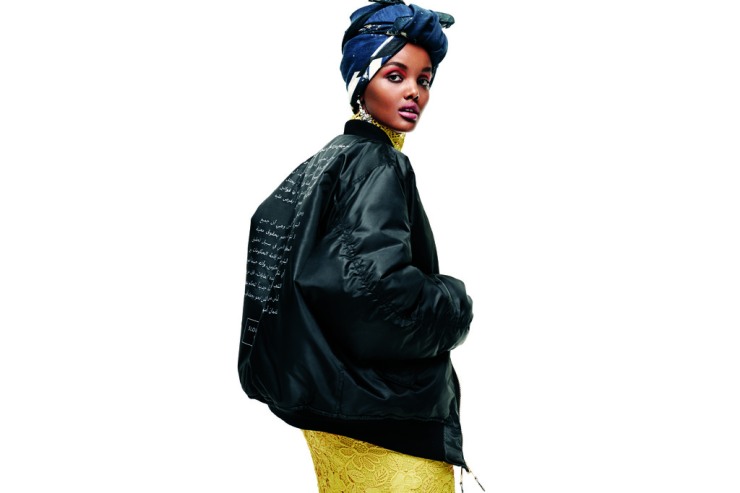 The theme is even translated through the gallery design. Inspired by classical Islamic architecture, they were designed by Iranian sisters Gisue Hariri and Mojgan Hariri. The screens are arched, the canopies latticed. It provides the perfect setting for clothes that are both reminiscent of the past and indicative of the present. 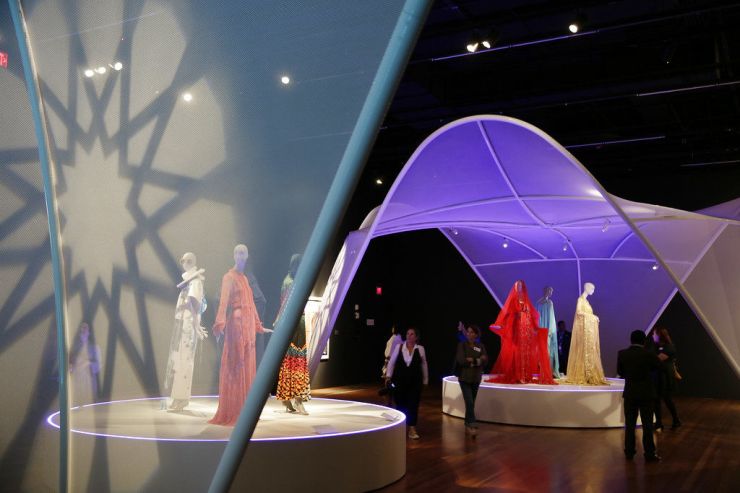 The museum curators and directors really wanted to show the complexity and the nuance of the Muslim fashion experience. They focused on Muslim communities here in the United States as well as worldwide.

Organizer Laura Camerlengo who regularly curates clothing exhibits at the Fine Arts Museum said, “We researched and interviewed designers in different areas of the globe, from the Middle East to Malaysia to Indonesia, and understood that there was this emergent outburst of energy and creativity coming from a lot of Muslim majority countries.”

One gaping hole we noticed was Muslim African fashion. Maybe we haven’t seen the pics, but the museum would be amiss to dismiss the large Muslim communities in countries like Somalia and Nigeria.

It features designers who were there from the start—Muslim women who wanted to fill the need of missing modest and fashionable clothing for themselves and others. Its interesting to note that many are on the younger end half of them are in their 20s or 30s. It really points to how recent the beginning of the modest fashion scene was–designers like Dian Pelangi, Marwa Atik, Melinda Looi, and Lisa Vogl really started making clothes and hijabs only a few years ago.

In the crowd were influencers like Summer Albarcha, Neelam Hakeem, Maria Alia and Mademoiselle Meme, whose success really shows the demand for modest fashion content. On Instagram, Albarcha said, “[It is] absolutely breathtaking to see so many modest mannequins in a contemporary museum that so many people visit from all over the world.”

In order to give an even more in-depth look to visitors, the museum organized several events. On the first night was a fashion show sponsored by The Modist, a modest high fashion retailer. Guests who visited on Saturday could attend a panel with the CEO of The Modist, Ghizlan Guenez, as well as Princess Deena Aljuhani Abdulaziz of Saudi Arabia, former editor in chief for Vogue Arabia. They spoke was about the evolution and role of Middle Eastern designers in the modest fashion sector.

With the latest trend being designers producing clothes that are longer, looser and more covered up—see Batsheva, Gucci, Coach, Ulla Johnson—it seems that the fashion industry is catching up with the Muslim style scene, wading into a world almost perfectly summarized by the deYoung exhibition. Fashion is realizing what Muslim women have known all along: more is more.

View all posts by hijabified

Da Crib University loungewear looks💗 #quarantinelife
How pwettttyyyy💗😍
Take this time to relax, unwind and catch up on things you were too busy for before☁️💗 #stayathome
Me on day 6 of quarantine
If ur able to yall better be quarantining rn ☝🏼
Hello sleeves! 👋
%d bloggers like this: